Top 5 things to do in Madrid

#1
Santiago Bernabeu Stadium
Real Madrid's 81,000-seat stadium has been the home of legends like Cristiano Ronaldo, Brazilian Ronaldo, Zinedine Zidane, Luis Figo, Roberto Carlos, Kaka, Gareth Bale, and so many more 'Galacticos'. It's not just huge though, it's also one of the most historic stadiums in football – it has hosted multiple European Cup finals, the 2010 Champions' League final, and Italy's 1982 World Cup Final victory.
#2
Museum of Illusions Madrid
The Museum of Illusions Madrid is one of 18 similar museums around the world. It is packed with optical illusions and interactive exhibits for the whole family, with heaps of fun photographic opportunities along the way. It is located in Madrid, Spain.
#3
Museo Nacional Thyssen-Bornemisza
What started in the 1920s as a private art collection, is now a museum which is part of Madrid's renowned 'Golden Triangle of Art'. Famed for the breadth of its works, you'll find works by Van Gogh, Goya, Hans Holbein The Younger, Titian, Kandinsky, Jackson Pollock, and many more here. Many masters are represented by only a single painting, as the focus of the collection is not on a single artist but the overarching evolution of art. The museum offers a chance to sample a very large array of heavyweights under a single roof.
#4
Museo Reina Sofía
Remodeled and converted into a museum in 1992, this 18th century hospital holds Madrid’s premier collection of contemporary art, including Picasso’s Guernica, which is arguably Spain’s single-most famous artwork. The Museo Reina Sofía also holds works by the other 20th-century titans of Spanish art, Salvador Dalí and Joan Miró.
#5
Prado Museum
Comprised of the former Spanish Royal Collection, the Prado is a beautiful old castle with more than a thousand fascinating works on display. One of the world's premier art galleries, the more than 7,000 paintings held in the Museo del Prado's collection are a penetrating look at the celebrated history of Spanish art. Prado offers free entrance from 18:00-20:00 on weekdays, and 17:00-19:00 on Sundays and holidays. This is often the busiest time and access to temporary exhibitions isn't included.

Combine Madrid favorites. Some things are better together.

What's on in Madrid

Return Journey: Art of the Americas in Spain

Goldsmith’s Work: Paintings and Sculptures from the Collection of Baron Thyssen-Bornemisza

Walid Raad, Cotton Under my Feet

Grab your headphones and explore the wonders of royal Madrid
From $10.75

Discover the city of three cultures with a Toledo day trip from Madrid
From $87.16
New on Tiqets

All things to do in Madrid

The biggest royal residence in Europe is certainly a sight to behold, with over 3,000 stunning rooms and a collection of art that would rival some of the world's best art galleries. The palace's present-day use is to hold state ceremonies and it is open to the public on most days.
4.7 / 5 (184)
From
$16.98
Madrid

While it's now the Madrid residence for the Dukes of Alba, it's not hard to notice the Palacio de Liria doesn't bear their name. Originally, the palace was built for the Third Duke of Liria in the late 18th century, but since passing hands to the Albas, it's lost none of its original glory. The palace is now open to the public, where you can tour 14 rooms, admire one of the world's finest private art collections; with work by Goya and Rubens; and learn more about the palace's past with an immersive audio guide.
4.6 / 5 (433)
From
$16.98
Madrid

Enjoy an interactive adventure at Sweet Space, a unique concept full of innovative experiences and lots of fun. Bringing art and new digital trends together, Sweet Space Museum lands in Madrid as the first location of a tour that will go to different places in Europe.
4.3 / 5 (117)
From
$20.37
Madrid

Stretching out over 20 hectares in the Casa de Campo, the Zoo Aquarium Madrid is one of the biggest and oldest in Europe. It's home to over 500 different species of animal, including pandas, wolves, giraffes and white tigers. Also features an aquarium and aviary.
4.7 / 5 (564)
From
$27.17
Madrid

The Royal Academy of Fine Arts of San Fernando, founded in 1752 during the reign of Ferdinand VI, is the artistic institution with the longest cultural trajectory in Spain. The Museum houses one of the best art galleries in the country, spanning five centuries and different schools. It offers a complete journey through the history of art from the Renaissance to the most current trends of the 21st century. The Academy conserves an exceptional heritage of more than 1,400 paintings, 1,300 sculptures, 15,000 drawings, around 40,000 prints and 9,000 intaglio matrices, as well as furniture, silver and goldsmith objects, porcelain and other decorative arts.
4.8 / 5 (8)
From
$9.96
Madrid

Velázquez Tech is an immersive museum in Spain, inspired by Diego Velázquez's masterpiece Las Meninas. Visitors are transported to the scene of his most famous work, as part of an 4D experience colored by moving projections, video mapping, LED lights, and interactive holograms. You can even speak to Diego himself!
4.5 / 5 (48)
From
$13.58

The heart of Madrid lends itself to walking so you can enjoy the center on foot. But if you're feeling even more adventurous, and want to venture farther afield, public transport is a vital part of your plan. In fact, Madrid has the second-longest metro system in Europe - London is the longest (and oldest). Rush hour in Madrid (07.30 – 09.00) can be crowded, and and beware of pickpockets at the touristy stations like Sol. Another option is the Hop-on, Hop-off bus, which runs a central route and one that goes out to the Bernabeu as well.

Madrid’s got numerous great tapas bars. The whole point of tapas is to eat a lot of a little, lubricate it with small glasses of vino or cerveza and let conversation flow with your amigos. You’ll find the trendy, gourmet culture in full swing at places like TriCiclo (Calle León 12), where hotshot young chefs use ingredients like cod glands and kumquats. If you're more into the old-school vibe, Bodegas Ricla (Calle de los Cuchilleros 6) could be your spot. It's been family run since 1867, and sure feels like it. The smoky callos a la madrileña (tripe) is a highlight.

Madrid's nightlife is legendary, and with good reason: Madrileños rise at noon and dine at 22:00. That's a schedule tailor-made for late night parties. Adjust your schedule accordingly. If you grab tapas around 22:00 or so, you should be primed for party when the night is somewhere between young and middle-aged. As you cruise the streets you’ll pass bars and bodegas, each with its own unique energy and nuance. One will feel right. And if you're ready for more, Madrid (unsurprisingly) has its share of heaving nightclubs.

What to do in Madrid for 3 days 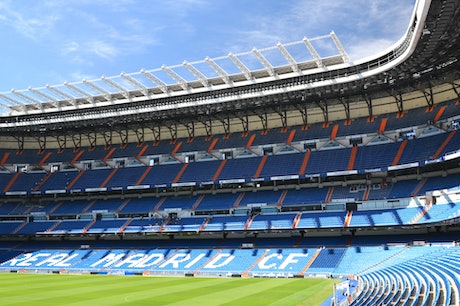 North Americans don’t quite get it, but football holds a near-religious sway over vast swathes of the world’s population. They see in it poetry and geometry and genius, and also villainy and soul-crushing disappointment. Many call it ‘The Beautiful Game.’ The Estadio Santiago de Bernabeu is a veritable temple of the world game. For seventy years it has hosted the original aristocrats of European football, Real Madrid and the many world greats who have donned the imperious white jersey. Players like Puskas, di Stefano, Zidane and two Ronaldos. Its trophy room is bursting with Spanish and European championships (they lead the honors table in both). Italy won the World Cup there in 1982. Architecturally, the stadium is a triumph too: it seats 85,000 fervent fans with amazing sight lines. But more than all this, the stadium is the repository of a city’s hopes, dreams and longing for glory and gives you a sense of the passion that the sport evokes in fans the world over. 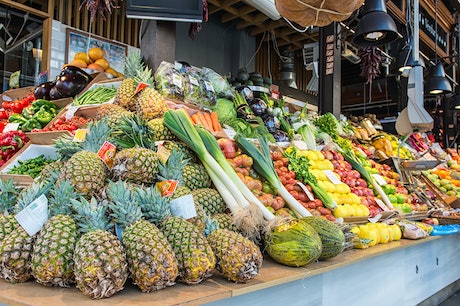 Madrid is a city for gourmets and gourmands. Tapas are popular, but you’ll also find plenty of Michelin stars knocking about in its charming streets. Its humbler fare is equally star-worthy; the food market is a big fixture on the Madrid food scene. Wander through, peruse the stalls and find yourself interacting with food in a way more tactile and interactive than in any restaurant. And finally, commit to a dish cooked fresh before your eyes and wash it down with a glass of Rioja. There are old markets which have been renovated with a hipster twist - and prices to match - such as the Mercado de San Miguel just off the Plaza Mayor. It boasts a great atmosphere and treats such as cava, oysters, chocolate and stuffed sea urchins. A market that has retained its workaday feel is the Mercado de Maravillas, which is Europe’s largest municipal market. It has over 200 stalls featuring the freshest fruit and veg, and regional specialties from all over Spain and beyond. 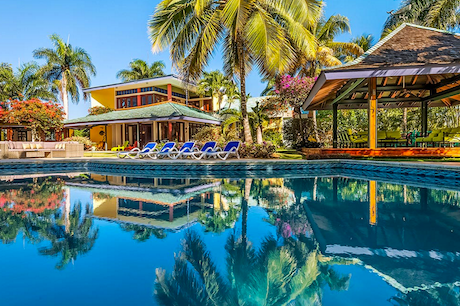 Madrid is perched inland on a 650-meter high plateau. It has no beaches, yet Madrileños flock to the water each summer. Specifically, to one of over 20 huge community pools. They’re very well run and part of an extensive parkland. We’re not just talking a watery refuge here but a proper day out where you can kick a ball, enjoy a picnic, and then splash about in the pool. The pools are both gigantic and crowded, but that’s part of the charm – you'll feel yourself part of the city. The one at Parque Deportivo Puerta del Hierro is a gob-smacking 130 meters long; this should give you some idea of how seriously they take summer bathing here. The more central Casa de Campo features three pools including one Olympic-sized one. So rub in the sunscreen, then rub shoulders with some people who have a far better tan than you. 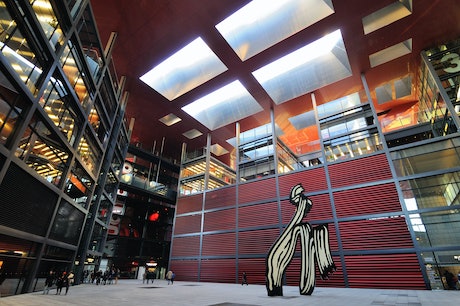 In the center of Madrid there's a holy trinity of museums that are individually impressive, but together would be the envy of any other world city. And what's more: they’re within a 15-minute walk of each other. Now, doing all three in a day could send you into M.O. (Museum Overload), but it's comforting that they're all together. The gigantic Prado is in the top tier of world museums and Madrid’s most visited attraction. La Reina Sofía is Spain’s museum of 20th century art and houses Guernica Picasso’s most famous work. Miró and Dalí are also well represented in the collection. The Thyssen-Bornemisza was formerly the world’s largest private art collection, and was bought in the 90s by the Spanish government. It features an eclectic collection of works from many different schools and eras, from the 13th century to contemporary works.

Best places to visit in Spain