Top 5 things to do in Barcelona

#1
Sagrada Familia
The Sagrada Familia is the magnum opus of the famous Catalan architect Antoni Gaudí. The cathedral was the finale to his incredible Modernist career, and it has been under continuous construction since 1882. Over time, the so-called 'architect of God' dropped all his other work so that he could focus exclusively on this project, which he did until his untimely death in 1926. The Sagrada Familia is due to be finished in 2026, on the 100th anniversary of Gaudí's death. By that time, the construction of the Sagrada Familia will have taken 144 years.
#2
Park Güell
Park Güell is Gaudí's fantasy-fuelled park in Carmel Hill, Barcelona. Walk amongst fantastic creations built in Gaudí's special brand of Catalan Modernism and enjoy panoramic views of Barcelona. Don't miss out on this quintessential Barcelona experience.
#3
Camp Nou
Camp Nou ('New Field' in Catalan) is a football stadium in Barcelona and the home ground of FC Barcelona. The second-largest football stadium in the world, it has a capacity for nearly 100,000 fans. To see a game there is to experience football at its purest, while an excursion to the museum is an experience in itself. Immersive and impressive, the museum features giant touch screens, sound installations (including match-day sounds), historical stats, and a trophy cabinet worthy of King Midas!
#4
Casa Batlló
Gaudí's masterpiece, Casa Batlló located in the heart of Barcelona, was built in 1877. In 1904, the wealthy Batlló family asked Gaudí to build another in its place. Instead, he decided to renovate the building and did so in his own inimitable style. With a wavy animalistic facade, brilliant colors, and thought-provoking whimsical features everywhere (check out the roof terrace), this is a Gaudí wonder.
#5
Telefèric de Montjuïc
Enjoy panoramic views of Barcelona by taking the recently refurbished Montjuïc Cable Car to Parc Montjuïc. This 750-meter-long cable car connects Barcelona to the top of a mountain, from where you'll have the very best views of the Catalan capital.

Combine Barcelona favorites. Some things are better together.

What's on in Barcelona

Beijing 2022. Together for a shared future

The heartbeat of nature. Drawings of the XIX century

Completion of the Towers of the Evangelists Luke and Mark

Miró. The most intimate legacy

A Photographic Journey: The Construction of Poble Espanyol

The World of Banksy Barcelona

All things to do in Barcelona

'I want my museum to be a single block, a labyrinth, a great surrealist object. It will be a totally theatrical museum. The people who come to see it will leave with the sensation of having had a theatrical dream.' Dalí got his wish. The Dalí Theatre-Museum – under which the artist himself lies buried – is one of the most surreal and theatrical museums in the world. This unique museum, decorated with giant eggs and fantastical figures, features the largest collection of works by Salvador Dalí, including exclusive items from his personal collection.
Barcelona

Another masterpiece by Gaudí built from 1905-10 and commissioned by the wealthy Pere Milà. This building was designed to be used as a fashionable home for the Milà family and as an office block. The original name of the house was Casa Milà, however the building is better known for its name La Pedrera (The Quarry) that refers to the uneven gray stone facade, which ripples around the corner of Carrer de Provença.
Barcelona

Palau Güell was one of the first important commissions Antoni Gaudí received at the start of his career. Eusebi Güell (industrialist, politician, and patron of the arts) wanted Gaudí to build him this peculiar urban palace as an extension of the family home on La Rambla. Today, you can book Palau Güell tickets online and visit a palace that's considered one of the masterpieces of the city's architectural landscape.
Barcelona

With 21 aquariums and 11,000 animals from 450 species Aquarium Barcelona is a fantastic destination for any mini-Jacques Cousteaus in your family. It consists of 21 large aquariums, a spectacular Oceanarium, a children's area and Planeta Aqua, an entire floor dedicated to our vast, salty, watery oceans.
Barcelona

The Mies van der Rohe Pavilion, a symbolic work of the Modern movement, was designed by Ludwig Mies van der Rohe and Lilly Reich as Germany's national pavilion for the 1929 Barcelona International Exposition. After the closing of the Exhibition, the Pavilion was dismantled in 1930. Over time, it became a key reference both in the trajectory of Mies van der Rohe and for the architecture of the 20th century as a whole.
Barcelona

Go back to nature and discover over 2,000 exotic animals in one of the largest city zoos in the world, with special live displays and eco-friendly conservation programmes.
Barcelona

If you're really looking to elevate your Barcelona adventure, look no further than the Barcelona Port Cable Car. This aerial tramway soars high above the 'Modernisme' architecture and bustling streets of the Catalan capital, providing a splendid bird's-eye view of the city. The Port Cable Car crosses the historic harbor of Port Vell and connects the Montjuïc hill with the seaside suburb of Barceloneta. It's not to be confused with the Montjuïc Cable Car, which links the upper terminus of the Montjuïc funicular with Montjuïc Castle.
Barcelona

The Museu Nacional D’art de Catalunya is the home of the world’s finest collection of Romanesque mural paintings and lots more by the greats, including Gaudi! The museum is located in Barcelona and is easy to reach by subway.
Barcelona

The Palau de la Música Catalana is a luxurious Catalan Art Nouveau masterpiece. Built between 1905 and 1908, the building unites the decorative arts of sculpture, mosaic, stained glass and ironwork. Surprisingly it wasn't designed by Gaudí! It was dreamed up by another Catalan architect: Lluís Domènech i Montaner. The Palau was declared a UNESCO World Heritage Site in 1997.
Barcelona

The hometown museum of one of the 20th century's greatest artists is the outcome of a friendship between two extraordinary creative personalities: Joan Miró, and his friend, the architect Josep Lluís Sert. The Fundació Joan Miró not only houses the single greatest collection of his work – the unconventional building is considered one of the most outstanding museum buildings in the world. Once you step inside, you’ll discover the paintings, sculptures, some textiles and drawings. There are thousands of items here and you’ll be able to pick out the artistic evolution of the artist.
Barcelona

Feel like you've seen all there is in Barcelona? Don't be so sure. Las Golondrinas is the company behind sightseeing cruises in Barcelona. Discover the city's magnificent coastline with some time at sea. Visitors can board their boats at Moll Drassanes s/n, and enjoy a new side of the city with a soft drink or ice cream aboard their ship's bar.
Vilassar de Dalt

Aerobús Barcelona tickets: the easiest way to get to and from Barcelona Airport
Bestseller

Quick and easy transport between Girona Airport and central Barcelona

Public transport such as the metro, tram and FGC (regional trains) are the quickest and most convenient way of getting around Barcelona. Different ticket types and travel cards can be bought at subway stations. Don't forget to explore by foot as well - Barcelona is full of treasures and tapas tucked away down narrow sidestreets.

Barcelona is known for its sunny Mediterranean weather, with warm summers and mild winters. The summer months of July and August reach up to 30°C/86°F, while in the winter months it gets down to 10°C/50°F. With only 90 days of rain a year, odds are your trip to Barcelona is going to be drenched in sunshine.

Fine golden sand beaches lapped at by shallow blue waters - the coast up and down from Barcelona is picturesque. They're beloved of residents and tourists alike; it's unique to have such great beaches so close to such a great city. Barcelona’s coastline stretches for 5 km and offers nine magnificent beaches.

What to do in Barcelona for 3 days 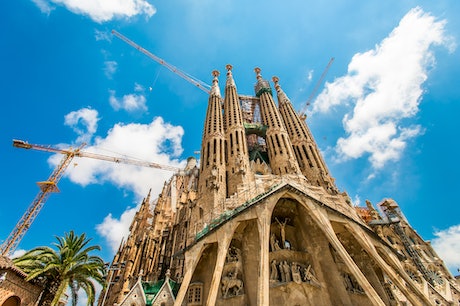 Visit the Sagrada Familia and be amazed by one of the world's most inspiring buildings. Gaudí himself was so dedicated to this project that he lived onsite for 16 years and is buried in the crypt below. The spiral staircases, seven chapels, stained glass windows and extensive details all speak to the world-renowned Catalan architect's dedication to this project. It's scheduled to be completed in 2026 - on the 100th anniversary of his death. 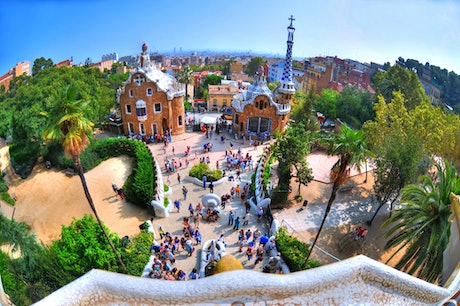 This is what happens when you let brilliantly idiosyncratic architect Antoni Gaudí design an outdoor space. Gingerbread houses, a magic lizard, and a serpent bench that winds around the perimeter, are just some of Park Güell's architecural flourishes. But this icon of Barcelona is also a perfectly kept immense garden; Gaudí's whimsical touches somehow contribute to - rather than detract from - the natural beauty. 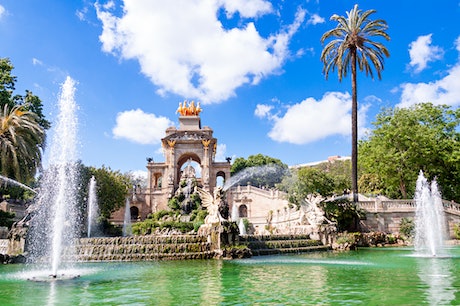 The Parc de la Ciutadella is Barcelona's 'green lung'. For a long time after its inception, this 17 hectare green space was the city's only park. The delightful Barcelona zoo, the epic fountain, and the charming mammoth sculpture are among the visitor highlights. Although to be fair, just coming and having a picnic in the sun or shade can also be a highlights of a visit to this vibrant city park. 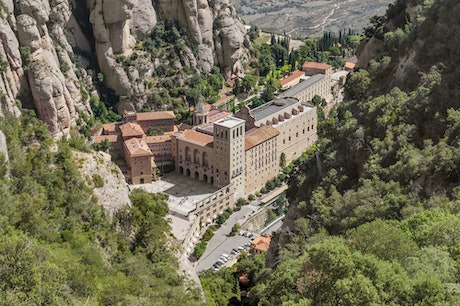 Getting out of the city to Montserrat

Visit one of Catalonia’s most magnificent places. The mountain sanctuary of Montserrat is definitely worth the trip. Montserrat is a Benedictine monastery, a natural park, a spiritual shrine, and a Catalan cultural cornerstone, all in one. A visit here offers a balance of cultural and natural diversions. Soak up magnificent views from the jagged rock formations, and visit a monastery and a museum.

Best places to visit in Spain